Secondary cancer is a term used to describe cancer cells that have spread, from the place where they started (primary site), to another part of the body (secondary site).

Most primary liver cancers starts within the cells of the liver and / or bile ducts and are a completely different type of cancer – further information on Non-Neuroendocrine Primary Liver Cancers can be found here.

The spread of Neuroendocrine Cancer is not always a sign of rapid or aggressive cancer.

If a very small, slow growing cancer is present then the passage of time can increase the risk of a cancer cell breaking away to enter the blood or lymphatic circulation.

Some primary sites can be so small they may not be visible on even the best of scans. If you have secondary cancer and the primary site cannot be clearly identified by scans or other tests, you may be told you have a Cancer of Unknown Primary (CUP). 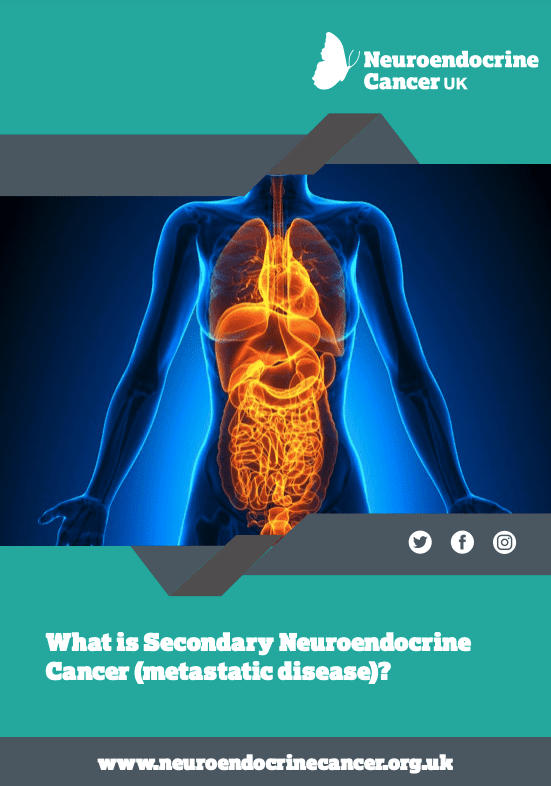 How does Secondary Cancer occur?

In terms of cancer development, normal cells have a set of rules that regulate growth and behaviour, in cancer the control signals go wrong and the rules are forgotten.

Cancer cells do not die and instead grow out of control, forming new, abnormal cells. These extra cells form a mass of tissue, called a tumour.

As tumours form and grow, cancer cells can grow into surrounding structures and some may break away from the tumour and enter either the blood stream and/or the lymphatic system.

In secondary cancer – that is spread or metastases – cancer cells break away from where they first formed, travel through the blood or lymph system, and form new tumours in other parts of the body. Cancer can spread to almost anywhere in the body. In Neuroendocrine Cancer the most common secondary sites are lymph nodes, the liver, the lungs and bones.

Cancer cells spread through the body in a series of steps. These steps include:

Most of the time, spreading cancer cells die at some point in this process. But, as long as conditions are favourable for the cancer cells at every step, some of them are able to form new tumours in other parts of the body. Metastatic cancer cells can also remain inactive at a distant site for many years before they begin to grow again, if at all. 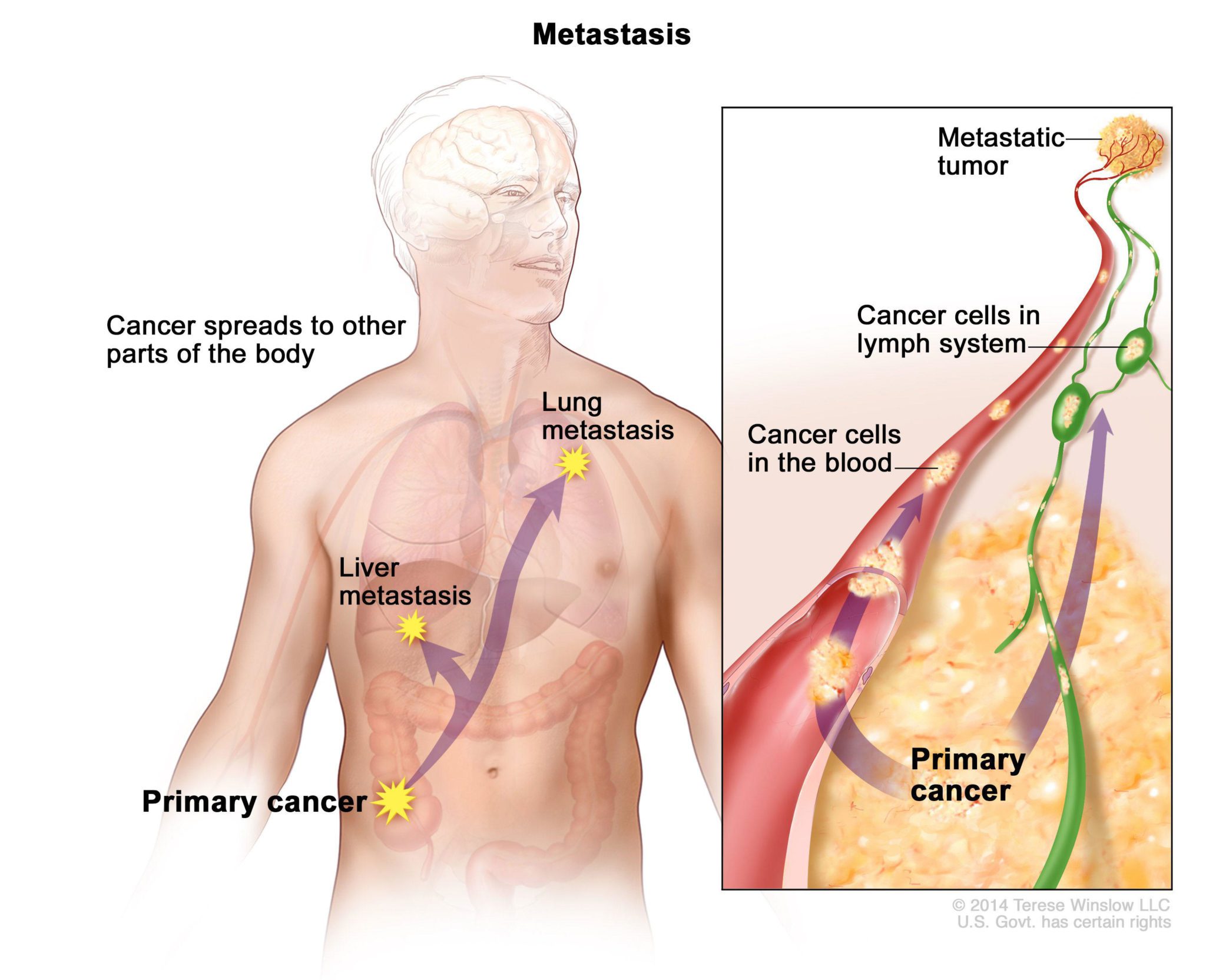 Secondary cancer may be present at the time that Neuroendocrine Cancer is discovered – indeed this is quite common and true for more than half of those diagnosed.

For many, the primary disease may have been present for a number of months or even years, with no signs or symptoms, until the disease has spread elsewhere. It may not be until symptoms, caused by the secondary tumour, occur that a suspicion that something is wrong is raised.

For example; in Neuroendocrine Cancer of the Small Bowel it is often not until a mesenteric mass (lymph node/tissue mass near the small bowel) or liver metastases occur, that symptoms develop – leading to diagnosis.

There are a number of tests that can be carried out to confirm a diagnosis of Primary and / or Secondary Neuroendocrine Cancer.

The type of tests you may have will be based on the type of Neuroendocrine Cancer you are thought or are known to have – and whether there is/was any evidence of secondary disease at the time of first diagnosis.

As with more common cancers, the earlier in the development of a primary cancer it is diagnosed, the higher the possibility of cure is. However, for Secondary Neuroendocrine Cancer there is no cure – but, this does not necessarily make this a terminal diagnosis.

Treatment will depend on the type (grading, functionality, etc.), position and size of your Primary Neuroendocrine Cancer. And the extent of your Secondary Cancer – where and how widely it has spread and overall how much cancer is present is important to know.

It may depend on whether you had Secondary Cancer at the time of diagnosis – or whether it has developed since – and whether you have already had treatment. If so, what effect did the treatment have – on both you and the cancer.

It will also depend on whether you have any other health concerns and / or illnesses and your general health and fitness.

One or more of the approaches below may be suggested:

Surgery: To remove, partially remove or bypass neuroendocrine cancer and / or secondary sites of disease (metastases).

Somatostatin analogues (SSAs): Can be used to help regulate the secretion of hormones if abnormal levels are being produced. SSAs may also be used to slow down growth rate in low to moderate grade ‘well-differentiated’ neuroendocrine cancer (NET).

Interventional radiology: Through techniques such as embolisation or ablation – can be used to treat Neuroendocrine Cancer that may have spread to the liver and / or lung(s).

Chemotherapy: Can be given orally (in tablets) or Intravenously (through a vein) to slow tumour growth or try to reduce tumour size. This may be the first line therapy in high grade disease – particularly “poorly-differentiated’ NEC or in combination with other treatments.

Targeted Molecular Therapies: Can be given orally (in tablets) or Intravenously (through a vein) to slow tumour growth or try to reduce tumour size.

Radiotherapy: Can be used alongside other treatments such as chemotherapy, after surgery or on its own. It can be particularly useful for treating a single site painful bone metastasis.

Endoscopic procedure: Treatment given via endoscopy – for example, insertion of a stent to keep an airway, bile duct or part of the bowel open, if it has become blocked or narrowed by a cancer that cannot be removed.

Immunotherapy : currently of unproven benefit in most Neuroendocrine Cancers, except for Skin – that is, Merkel Cell Carcinoma (where Avelumab has received approval for use within the NHS).

Clinical studies and trials are ongoing.

Clinical Trials: Clinical research and safe new treatment development is essential to provide best care for those with Neuroendocrine Cancer – we need to know that treatments not only work but work safely. There are several phases of trial therapy – further information can be found here

Bone-strengthening treatment: Such as Bisphosphonates or other agents may be used in the management of bone metastases.

Further information on the above treatments can be found in our Treatments Section here.

Bio-psycho-social Support (BPS): Includes interventions to support you to manage physical symptoms, alongside mental health/emotional well-being and social support – and should run alongside all care, from diagnosis. It can include anything from simple medication and / or a combination of some of the treatments mentioned above to information giving and/or counselling to dietary advice to practical support including financial advice e.g. benefits and work.

Palliative Care : also known as symptom control as it refers to what may be used to alleviate or reduce the impact your cancer, other health issues and /or treatments may be having on you and your physical and mental health. It can include anything from simple medication and / or a combination of some of the treatments mentioned above to counselling and practical support. Palliative care also includes ‘end-of-life’ care.

This is not an exhaustive list – and other treatments may be offered that are tailored specifically to you. Your symptoms, your cancer, your overall health and, importantly, your choice.

All treatments decisions should be focused on the benefit you may gain from them and the impact they may have on your quality of life.

There are expert agreed guidelines regarding how and when follow up should occur, however, in practice this varies and often with good reason – follow up should be expert informed and evidence /research based but also tailored to you and what is appropriate for your best care.